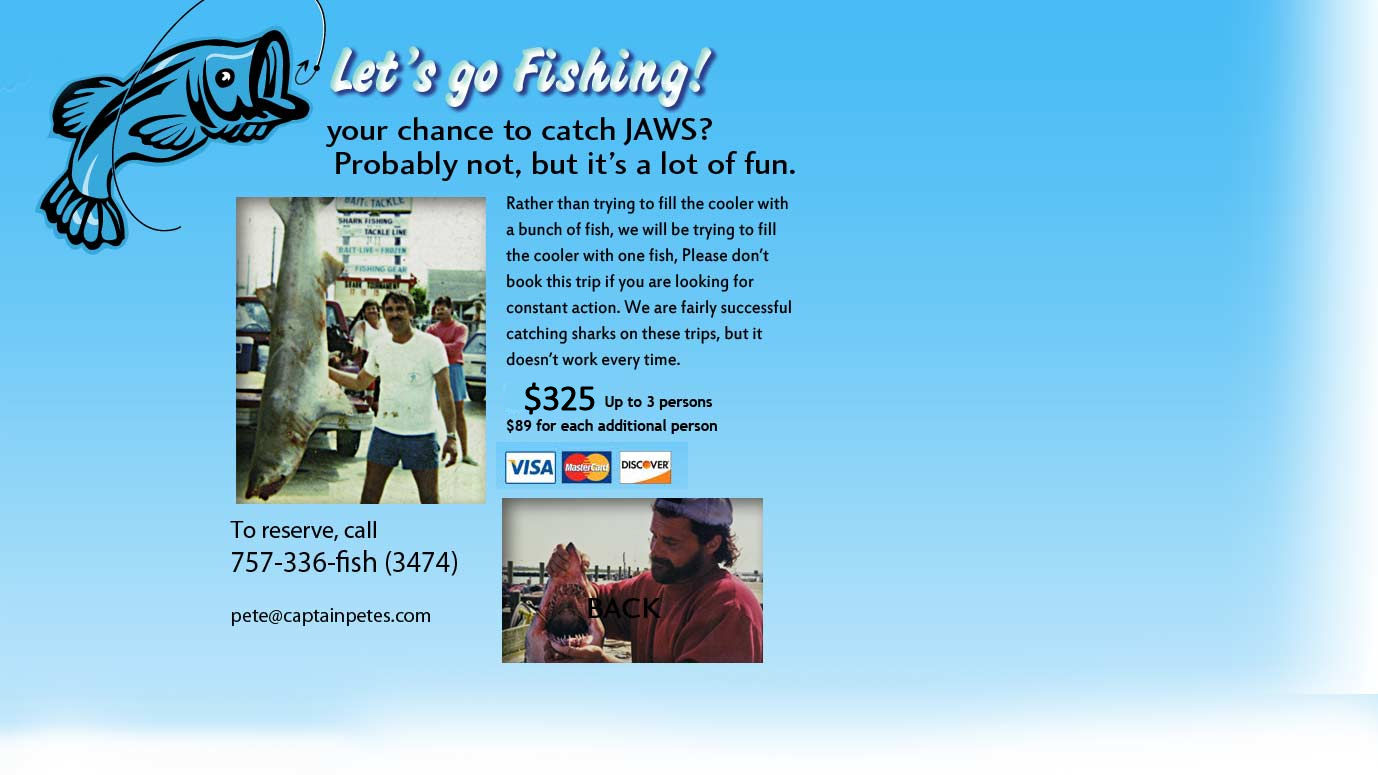 Although shark numbers have been significantly reduced over the past years due to extreme over fishing, there are still good numbers and a wide variety of sharks in Virginia's bays and ocean waters. Depending on the time of the year, species that can be found in the bays and surf include Sand Tiger, Dusky, Hammerhead , Bonnethead, Finetooth, Bull, Sharpnose, Dogfish and Nurse. In the near shore ocean there are Sandbar, Hornshark, Thresher and Blacktip.

Offshore there are Tiger, Mako and Blue sharks. Yes, we also have Great Whites and they pretty much go where ever they want.

In late May through June large female Sand Tigers and Duskys come into the back bays to spawn. These females can grow to well over 400 pounds. Depending on water temperature and availability of food, some of these sharks remain in the bay throughout the summer. During this same time Hammerheads are spawning in the near shore ocean. The newborn Hammerheads remain in and around the inlets throughout the summer months. Threshers migrate through Virginia in May and June, typically staying 1 to 5 miles off the beach. Cutter sharks arrive in June and remain in the back bays well into fall. Although Cutters don't grow to be as large as many of the other sharks, averaging 4 to 5 feet, they make up for it spirit. They are aggressive eaters, ferocious fighters and provide lots of fun on light tackle often leaping out of the water during the battle. They are also one of the few sharks that you are still allowed to invite home for dinner.

Makos arrive in mid May around the 20 fathom line with the bluefish, much to the dismay of the bluefish I might add. They are considered by many, including myself, to be the ultimate game fish. Their signature 10 foot leap with a double back flip starts the battle when you set the hook and they are one of the most powerful fish in the ocean. We fought a 500 pound Mako on 80 pound tackle for close to 6 hours before landing it. They are the only natural enemy of the Broadbill Swordfish, which is a pretty awesome fish itself. The Mako doesn't mess with the end of the Swordfish that has the bill on it, they attack the Swordfish from behind and bite its tail off, then finish off the helpless fish. The only differences between a Mako and a Great White are that the Great White has saturated teeth and that the Mako is faster and more aggressive

Tigers are a warmer water shark and show up right around the same time as the sea turtles. Sea turtles have about the same opinion of Tiger sharks that bluefish have of Makos. Tiger sharks can grow up to 20 feet long and accounted for many of the missing sailors when their ships were torpedoed during World War II.

Blacktips show up in late June right behind the croakers and are the main factor that inspire the croakers to move into the bay. Blacktips remain in our near shore ocean waters throughout the summer. The artificial reefs offer excellent fishing for Blacktips.

Hornsharks are a winter shark and sandsharks are a summer shark. Their correct name is dogfish, and they are one of the few sharks that don't have teeth. They are both good to eat and are marketed as steak fish, which sounds more tasty than dogfish.

Sandtigers are one of the most furious looking sharks with their long, straggly, protruding teeth. Sandtigers are actually far less aggressive towards humans than most of the other large sharks, which is a good thing because they grow to over 400 pounds and remain in the bay, surf and near shore ocean waters all summer. Sandtigers main diet consists of skates, rays and schooling bait fish.

When fishing for sharks, live bait is always best. Live bluefish, spot, croaker and small children all work well. If you don't have live bait, frozen mackerel or bunker will both work. Wire leader is a must for most sharks, single strand works best. Don't forget, you must wear gloves when handling wire. Your leader should be longer than the shark that you plan to catch, because sharks will often wrap the leader around themselves and their sandpaper like skin will cut your line. If you are fishing for larger sharks, a combination of wire and heavy mono often works best.

Although floats are most popular when fishing for shark,try fishing at different depths. If you plan of keeping your shark you will need a gaff and tail rope. When gaffing a shark it is important to gaff it near the tail, the anal hole is the best spot. If you gaff the shark near the head you will be pulling the end with all the teeth in it towards you, which is a bad idea. Instead, its best to have the tail out of the water where you can tail rope it and tie it off to a cleat. If you have not done this before, I suggest starting out with a small shark. Another important thing to remember when shark fishing is to let the shark tire its self out before trying to land it, never gaff a green shark.. If the shark is not ready to come out of the pool yet when you gaff it, chances are you are going to loose your gaff or worse. Don't bring the shark on the boat!

If you plan on keeping a shark, check the current size and species regulations before you go. Many of the sharks mentioned in this article must be released and many others must be of a certain length. If you are releasing the shark, cut the leader well away from its mouth. There are two reasons for this, you don't want the shark to swallow the leader or your hand. When the shark is beside the boat, it's not a happy shark. It can see you and will try to bite you. It's best to leave a long leader so it will drag along side the shark until the hook falls out or rusts off.

If you plan on eating the shark it is important that you clean it as soon as possible. Sharks urinate through their skin and will develop a ammonia smell soon after they die.

Most sharks are very good to eat. They have a firm, mild, white meat that can be cooked many ways, including on the grill.